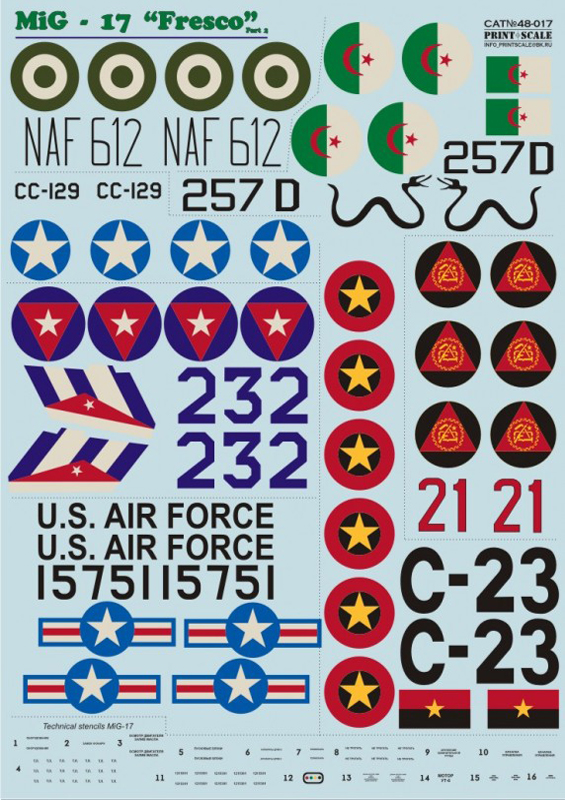 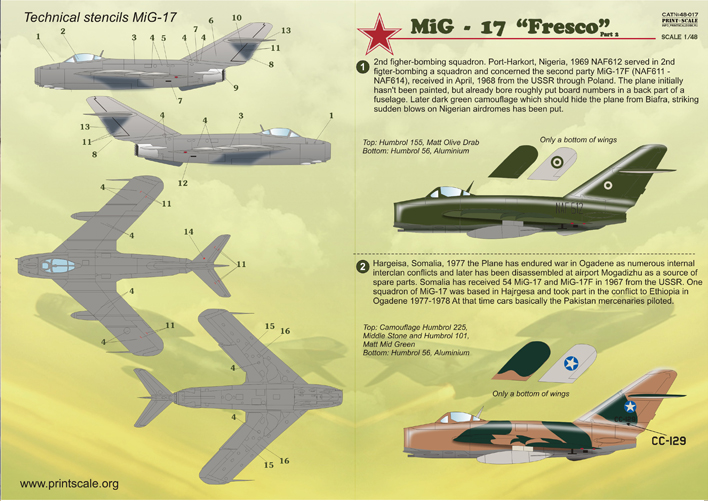 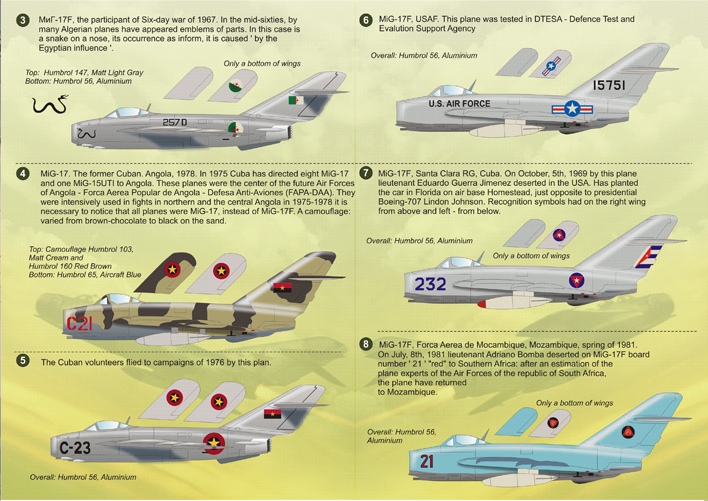 MIG-17 Fresco Part 2 / 48-017 /
1. 2nd figher-bombing squadron. Port-Harkort, Nigeria, 1969 NAF612 served in 2nd figter-bombing a squadron and concerned the second party MiG-17F (NAF611 - NAF614), received in April, 1968 from the USSR through Poland. The plane initially hasn't been painted, but already bore roughly put board numbers in a back part of a fuselage. Later dark green camouflage which should hide the plane from Biafra, striking sudden blows on Nigerian airdromes has been put.

2. Hargeisa, Somalia, 1977 the Plane has endured war in Ogadene as numerous internal interclan conflicts and later has been disassembled at airport Mogadizhu as a source of spare parts. Somalia has received 54 MiG-17 and MiG-17F in 1967 from the USSR. One squadron of MiG-17 was based in Hajrgesa and took part in the conflict to Ethiopia in Ogadene 1977-1978 At that time cars basically the Pakistan mercenaries piloted.

3.MIG-17F, the participant of Six-day war of 1967. In the mid-sixties, by many Algerian planes have appeared emblems of parts. In this case is a snake on a nose, its occurrence as inform, it is caused ' by the Egyptian influence '.

4. MiG-17. The former Cuban. Angola, 1978. In 1975 Cuba has directed eight MiG-17 and one MiG-15UTI to Angola. These planes were the center of the future Air Forces of Angola - Forca Aerea Popular de Angola - Defesa Anti-Aviones (FAPA-DAA). They were intensively used in fights in northern and the central Angola in 1975-1978 it is necessary to notice that all planes were MiG-17, instead of MiG-17F. A camouflage: varied from brown-chocolate to black on the sand.

5. The Cuban volunteers flied to campaigns of 1976 by this plan.

7. MiG-17F, Santa Clara RG, Cuba. On October, 5th, 1969 by this plane lieutenant Eduardo Guerra Jimenez deserted in the USA. Has planted the car in Florida on air base Homestead, just opposite to presidential Boeing-707 Lindon Johnson. Recognition symbols had on the right wing from above and left - from below.

8. MiG-17F, Forca Aerea de Mocambique, Mozambique, spring of 1981.
On July, 8th, 1981 lieutenant Adriano Bomba deserted on MiG-17F board number ' 21 ' "red" to Southern Africa: after an estimation of the plane experts of the Air Forces of the republic of South Africa, the plane have returned to Mozambique.