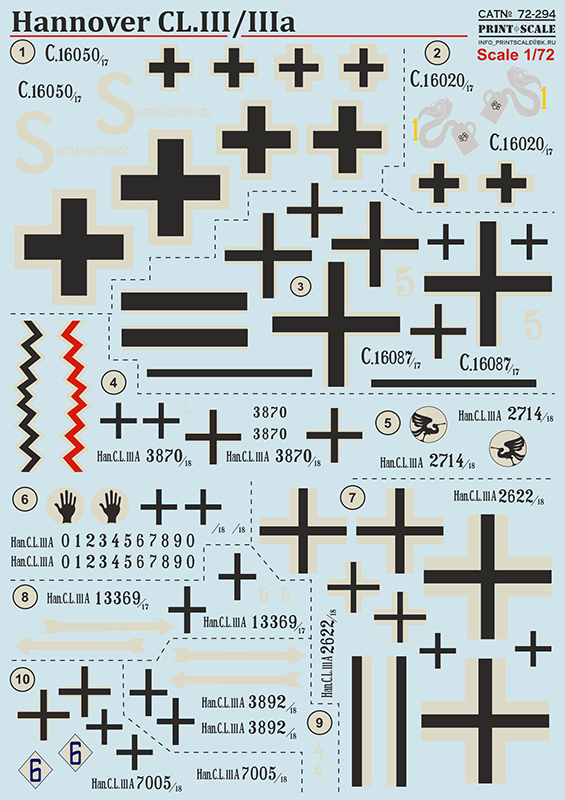 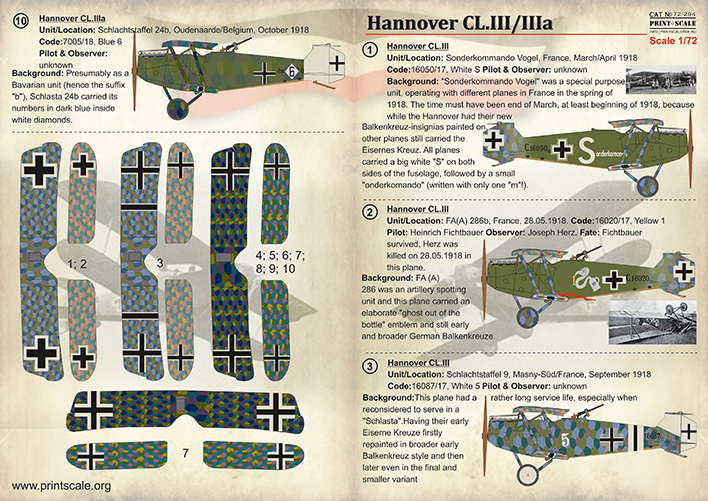 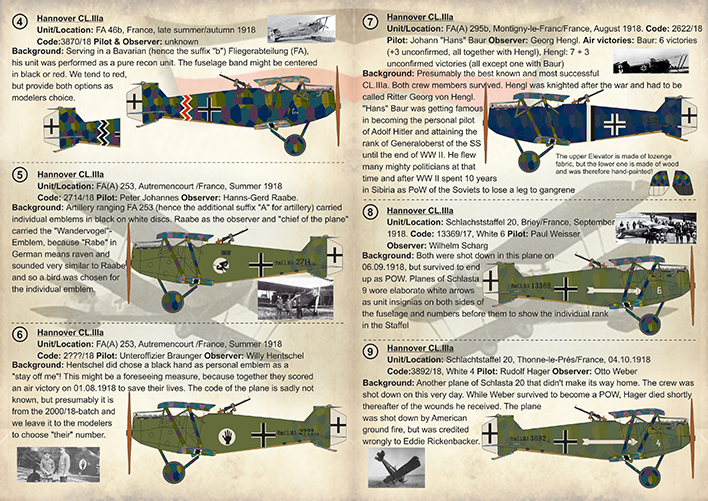 Hannover CL.lll/llla / 72-294 /
1. Hannover CL.III. Unit/Location: Sonderkommando Vogel, France, March/April 1918. Code:16050/17, White S Pilot & Observer: unknown
Background: "Sonderkommando Vogel" was a special purpose unit, operating with different planes in France in the spring of 1918. The time must have been end of March, at least beginning of 1918, because while the Hannover had their new. Balkenkreuz-insignias painted on, other planes still carried the Eisernes Kreuz. All planes carried a big white "S" on both sides of the fuselage, followed by a small "onderkomando" (written with only one "m"!).

3. Hannover CL.III. Unit/Location: Schlachtstaffel 9, Masny-Sud/France, September 1918. Code:16087/17, White 5 Pilot & Observer: unknown. Background:This plane had a rather long service life, especially when reconsidered to serve in a "Schlasta".Having their early Eiserne Kreuze firstly repainted in broader early Balkenkreuz style and then later even in the final and smaller variant.

4. Hannover CL.IIIa. Unit/Location: FA 46b, France, late summer/autumn 1918. Code:3870/18 Pilot & Observer: unknown. Background: Serving in a Bavarian (hence the suffix "b") Fliegerabteilung (FA), his unit was performed as a pure recon unit. The fuselage band might be centered in black or red. We tend to red, but provide both options as modelers choice.

5. Hannover CL.IIIa. Unit/Location: FA(A) 253, Autremencourt /France, Summer 1918. Code: 2714/18 Pilot: Peter Johannes Observer: Hanns-Gerd Raabe. Background: Artillery ranging FA 253 (hence the additional suffix "A" for artillery) carried
individual emblems in black on white discs. Raabe as the observer and "chief of the plane" carried the "Wandervogel"-
Emblem, because "Rabe" in German means raven and sounded very similar to Raabe and so a bird was chosen for the individual emblem.

6. Hannover CL.IIIa. Unit/Location: FA(A) 253, Autremencourt /France, Summer 1918. Code: 2???/18 Pilot: Unteroffizier Braunger Observer: Willy Hentschel. Background: Hentschel did chose a black hand as personal emblem as a "stay off me"! This might be a foreseeing measure, because together they scored an air victory on 01.08.1918 to save their lives. The code of the plane is sadly not known, but presumably it is from the 2000/18-batch and we leave it to the modelers to choose "their" number.

7. Hannover CL.IIIa. Unit/Location: FA(A) 295b, Montigny-le-Franc/France, August 1918. Code: 2622/18. Pilot: Johann "Hans" Baur Observer: Georg Hengl. Air victories: Baur: 6 victories (+3 unconfirmed, all together with Hengl), Hengl: 7 + 3 unconfirmed victories (all except one with Baur). Background: Presumably the best known and most successful CL.IIIa. Both crew members survived. Hengl was knighted after the war and had to be called Ritter Georg von Hengl. "Hans" Baur was getting famous in becoming the personal pilot of Adolf Hitler and attaining the rank of Generaloberst of the SS until the end of WW II. He flew
many mighty politicians at that time and after WW II spent 10 years in Sibiria as PoW of the Soviets to lose a leg to gangrene.

8. Hannover CL.IIIa. Unit/Location: Schlachststaffel 20, Briey/France, September 1918. Code: 13369/17, White 6 Pilot: Paul Weisser Observer: Wilhelm Scharg. Background: Both were shot down in this plane on 06.09.1918, but survived to end up as POW. Planes of Schlasta 9 wore elaborate white arrows as unit insignias on both sides of the fuselage and numbers before them to show the individual rank in the Staffel.

9. Hannover CL.IIIa. Unit/Location: Schlachtstaffel 20, Thonne-le-Pres/France, 04.10.1918. Code:3892/18, White 4 Pilot: Rudolf Hager Observer: Otto Weber. Background: Another plane of Schlasta 20 that didn't make its way home. The crew was
shot down on this very day. While Weber survived to become a POW, Hager died shortly thereafter of the wounds he received. The plane was shot down by American ground fire, but was credited wrongly to Eddie Rickenbacker.
10. Hannover CL.IIIa. Unit/Location: Schlachtstaffel 24b, Oudenaarde/Belgium, October 1918. Code:7005/18, Blue 6. Pilot & Observer: unknown. Background: Presumably as a Bavarian unit (hence the suffix "b"), Schlasta 24b carried its  numbers in dark blue inside white diamonds.