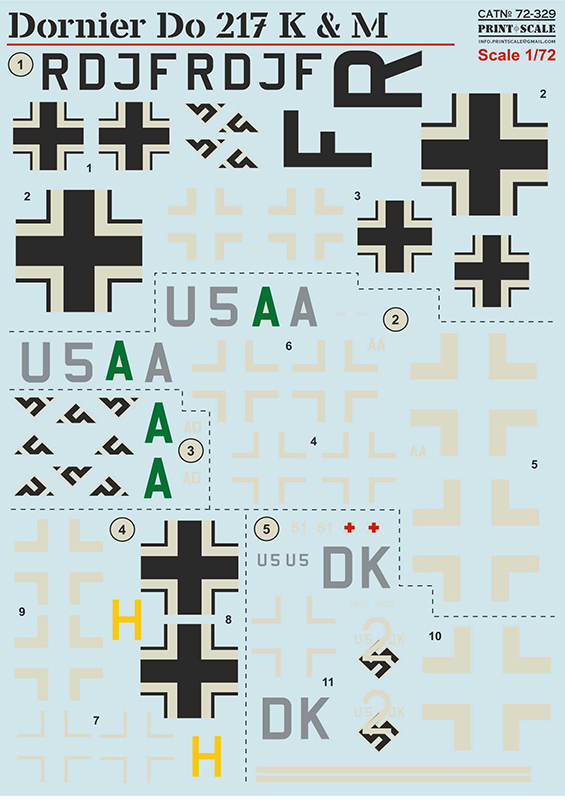 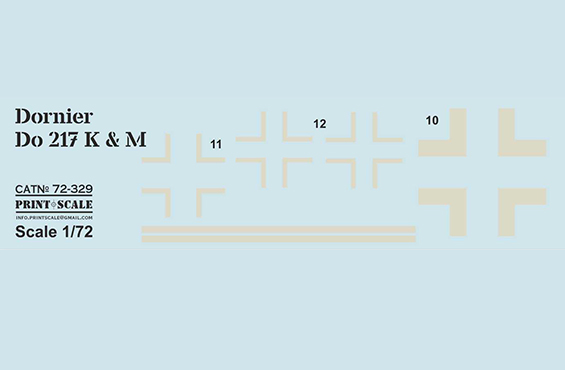 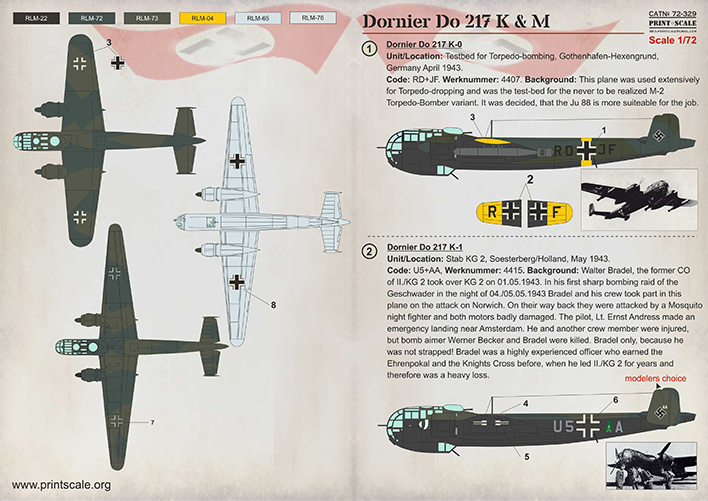 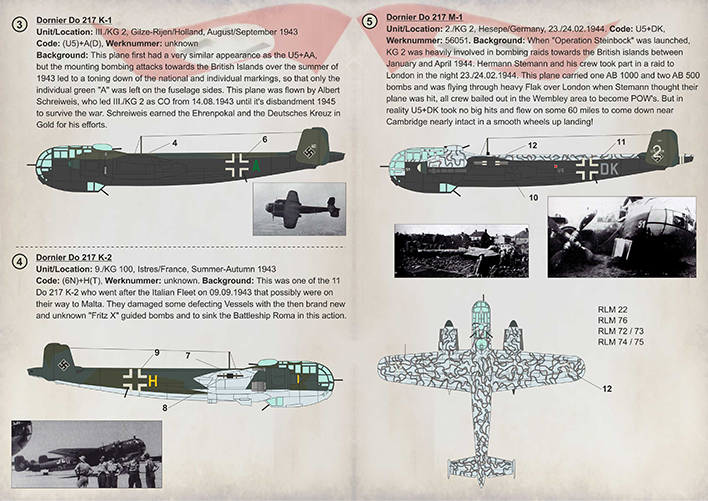 Dornier Do.217 K & M / 72-329 /
1. Dornier Do 217 K-0
Unit/Location: Testbed for Torpedo-bombing, Gothenhafen-Hexengrund, Germany April 1943. Code: RD+JF. Werknummer: 4407. Background: This plane was used extensively for Torpedo-dropping and was the test-bed for the never to be realized M-2
Torpedo-Bomber variant. It was decided, that the Ju 88 is more suiteable for the job.

2. Dornier Do 217 K-1
Unit/Location: Stab KG 2, Soesterberg/Holland, May 1943. Code: U5+AA, Werknummer: 4415. Background: Walter Bradel, the former CO of II./KG 2 took over KG 2 on 01.05.1943. In his first sharp bombing raid of the Geschwader in the night of 04./05.05.1943 Bradel and his crew took part in this plane on the attack on Norwich. On their way back they were attacked by a Mosquito
night fighter and both motors badly damaged. The pilot, Lt. Ernst Andress made an emergency landing near Amsterdam. He and another crew member were injured, but bomb aimer Werner Becker and Bradel were killed. Bradel only, because he was not strapped! Bradel was a highly experienced officer who earned the Ehrenpokal and the Knights Cross before, when he led II./KG 2 for years and therefore was a heavy loss.

3. Dornier Do 217 K-1
Unit/Location: III./KG 2, Gilze-Rijen/Holland, August/September 1943. Code: (U5)+A(D), Werknummer: unknown. Background: This plane first had a very similar appearance as the U5+AA, but the mounting bombing attacks towards the British Islands over the summer of 1943 led to a toning down of the national and individual markings, so that only the individual green "A" was left on the fuselage sides. This plane was flown by Albert Schreiweis, who led III./KG 2 as CO from 14.08.1943 until it's disbandment 1945 to survive the war. Schreiweis earned the Ehrenpokal and the Deutsches Kreuz in Gold for his efforts.

5. Dornier Do 217 M-1
Unit/Location: 2./KG 2, Hesepe/Germany, 23./24.02.1944. Code: U5+DK, Werknummer: 56051. Background: When "Operation Steinbock" was launched, KG 2 was heavily involved in bombing raids towards the British islands between January and April 1944. Hermann Stemann and his crew took part in a raid to London in the night 23./24.02.1944. This plane carried one AB 1000 and two AB 500 bombs and was flying through heavy Flak over London when Stemann thought their plane was hit, all crew bailed out in the Wembley area to become POW's. But in reality U5+DK took no big hits and flew on some 60 miles to come down near
Cambridge nearly intact in a smooth wheels up landing!