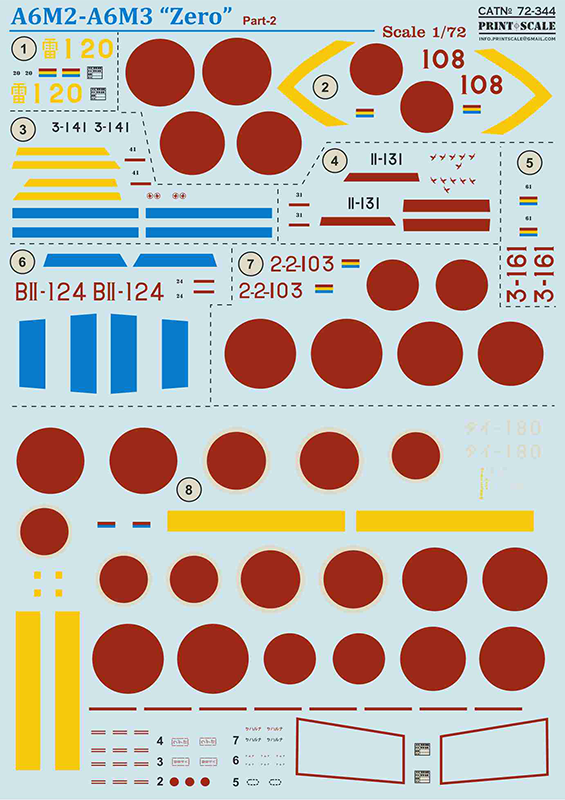 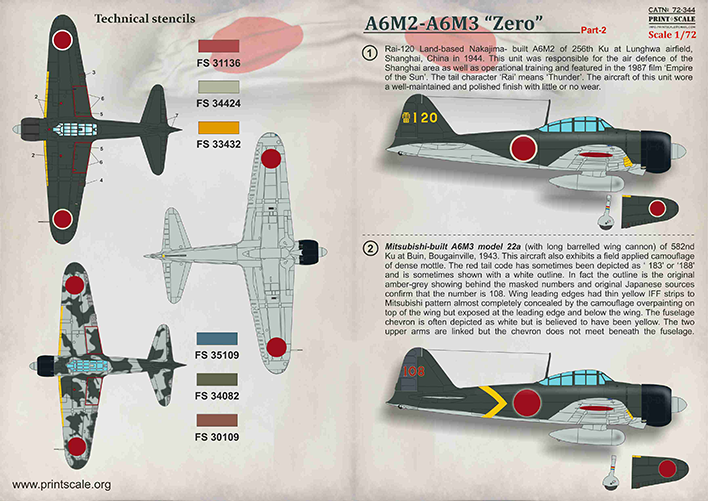 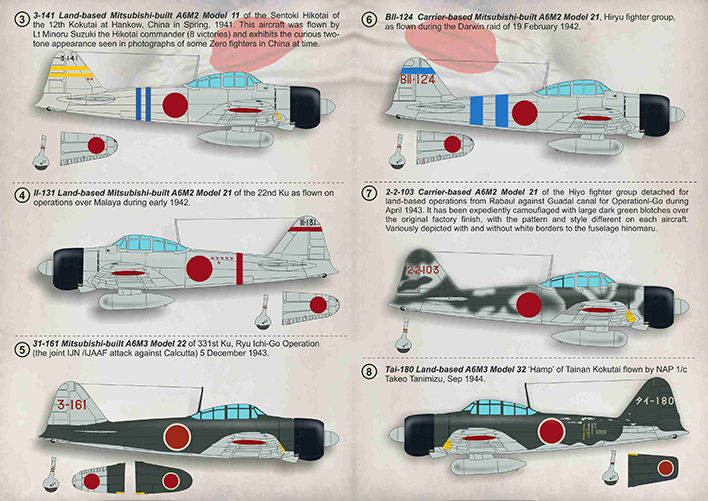 A6M2-A6M3 "Zero" Part-2 / 72-344 /
1. Rai-120 Land-based Nakajima- built A6M2 of 256th Ku at Lunghwa airfield, Shanghai, China in 1944. This unit was responsible for the air defence of the Shanghai area as well as operational training and featured in the 1987 film ‘Empire of the Sun’. The tail character ‘Rai’ means ‘Thunder’. The aircraft of this unit wore a well-maintained and polished finish with little or no wear.


2. 108 Mitsubishi-built A6M3 model 22a (with long barrelled wing cannon) of 582nd Ku at Buin, Bougainville, 1943. This aircraft also exhibits a field applied camouflage of dense mottle. The red tail code has sometimes been depicted as ‘ 183' or ‘188' and is sometimes shown with a white outline. In fact the outline is the original amber-grey showing behind the masked numbers and original Japanese sources confirm that the number is 108. Wing leading edges had thin yellow IFF strips to Mitsubishi pattern almost completely concealed by the camouflage overpainting on top of the wing but exposed at the leading edge and below the wing. The fuselage chevron is often depicted as white but is believed to have been yellow. The two upper arms are linked but the chevron
does not meet beneath the fuselage.

3. 3-141 Land-based Mitsubishi-built A6M2 Model 11 of the Sentoki Hikotai of the 12th Kokutai at Hankow, China in Spring, 1941. This aircraft was flown by Lt Minoru Suzuki the Hikotai commander (8 victories) and exhibits the curious two-tone appearance seen in photographs of some Zero fighters in China at time.

7. 2-2-103 Carrier-based A6M2 Model 21 of the Hiyo fighter group detached for land-based operations from Rabaul against Guadal canal for Operationl-Go during April 1943. It has been expediently camouflaged with large dark green blotches over
the original factory finish, with the pattern and style different on each aircraft. Variously depicted with and without white borders to the fuselage hinomaru.