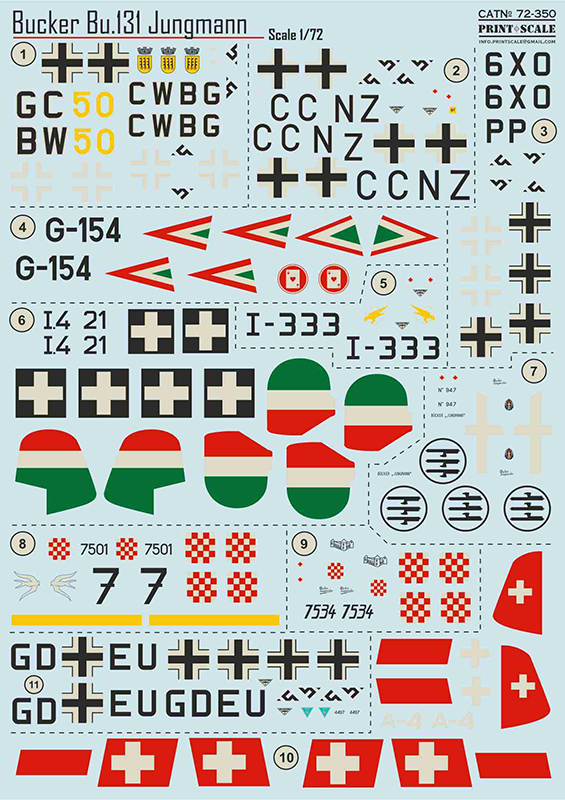 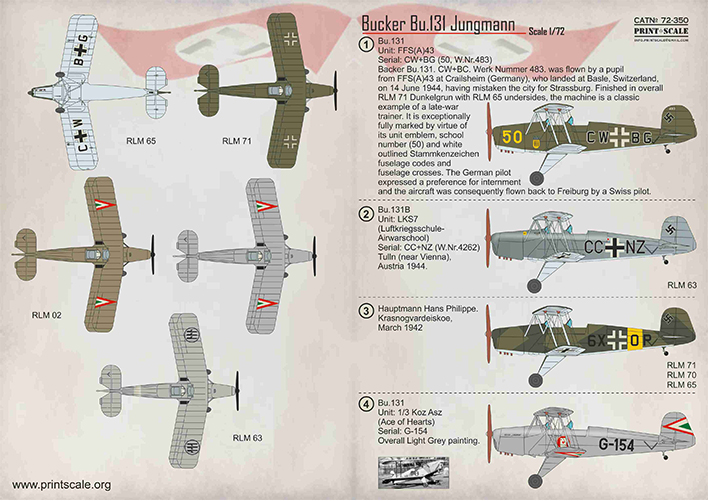 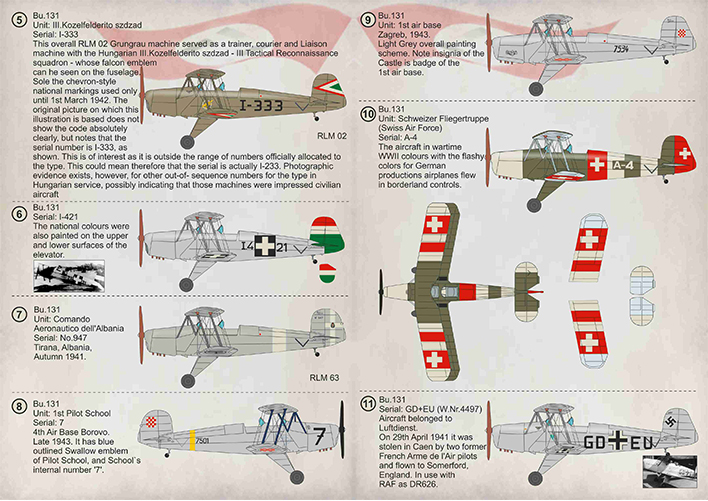 Bucker Bu.131 Jungmann / 72-350 /
1. Bu.131. Unit: FFS(A)43. Serial: CW+BG (50, W.Nr.483). Backer Bu.131. CW+BC. Werk Nummer 483. was flown by a pupil from FFS(A)43 at Crailsheim (Germany), who landed at Basle, Switzerland, on 14 June 1944, having mistaken the city for Strassburg. Finished in overall RLM 71 Dunkelgrun with RLM 65 undersides, the machine is a classic example of a late-war trainer. It is exceptionally fully marked by virtue of its unit emblem, school number (50) and white outlined Stammkenzeichen fuselage codes and fuselage crosses. The German pilot expressed a preference for internment and the aircraft was consequently flown back to Freiburg by a Swiss pilot.

5. Bu.131. Unit: III.Kozelfelderito szdzad. Serial: I-333. This overall RLM 02 Grungrau machine served as a trainer, courier and Liaison machine with the Hungarian III.Kozelfelderito szdzad - III Tactical Reconnaissance squadron - whose falcon emblem can he seen on the fuselage. Sole the chevron-style national markings used only until 1st March 1942. The original picture on which this illustration is based does not show the code absolutely clearly, but notes that the serial number is I-333, as shown. This is of interest as it is outside the range of numbers officially allocated to the type. This could mean therefore that the serial is actually I-233. Photographic evidence exists, however, for other out-of- sequence numbers for the type in Hungarian service, possibly indicating that those machines were impressed civilian aircraft.
6. Bu.131. Serial: I-421. The national colours were also painted on the upper and lower surfaces of the elevator.

10. Bu.131. Unit: Schweizer Fliegertruppe (Swiss Air Force). Serial: A-4 The aircraft in wartime WWII colours with the flashy
colors for German productions airplanes flew in borderland controls.
11. Bu.131. Serial: GD+EU (W.Nr.4497) Aircraft belonged to Luftdienst. On 29th April 1941 it was stolen in Caen by two former French Arme de l'Air pilots and flown to Somerford, England. In use with RAF as DR626.